Just a quick post to point out a cool new feature in SpikeMark — Input Actions.

Before Christmas, one of our customers had a specific need. They do a lot of performer flying systems and build incredibly complex cue link sequences to achieve realistic flying effects. Sometimes a winch needs to be temporarily removed from the show for a cue or two. If a performer misses a pickup, the motor needs to be disabled and the automation tech will drive the winch manually to get the actor back on spike. They have built their own hardware to make it easy to switch between automated control and joystick control, but SpikeMark wasn’t playing nice.

In an automated cue link sequence, SpikeMark wants to see every motor involved in the cue load the cue information before executing. This is obviously done for safety, if the cue isn’t fully loaded SpikeMark doesn’t want to crash scenery. In the performer flying scenario, the operator KNOWS that it’s OK to run the cue sequence, in fact disrupting the link sequence causes a lot of trouble. What was needed was a button that could be pressed to temporarily deactivate a motor and let the rest of the show carry on as if it didn’t exist. So… what to do…

Just after Christmas, another customer had a  show with a triple ring turntable. Each ring would be running in a cue and at an actor-driven moment in the  show, the middle ring needs to decelerate and stop. If you tried to use “Stop All Cues”, all 3 rings would stop. The stop point is actor driven, so there’s no way to write an automated link. What was needed was a button that could be pressed to abort a single motor out of a cue sequence.
So.. what to do…

If you have a  Stagehand FX, you can now use the inputs to trigger global actions. The first two actions that have been created are:

Input  Actions can be added to any FX input and multiple actions can be attached to a single input, making some cool effects possible. Below is a screenshot: 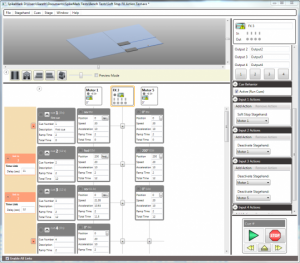 If you have ideas for more Input Actions, let us know because I’d love to make this feature even more useful.