It is hard to believe that Spikemark 4 was released 19 months ago – and more mind numbing that in that same time we have released 19 updates!  (plus a few new machines, controllers and custom projects along the way…) As of this writing Spikemark 4.4.0 is current and out in the world.  Although we have been releasing new features and bug fixes more than monthly, we have missed the boat a little on the paperwork front.  As we are toiling away in front of screens writing manual updates and super cool screenshots, we thought taking a few minutes to get all the features and bug fixes into writing.

Below are the features added to Spikemark 4

Let’s take a look at the new key features, broken down by version, in bit more detail.

A group is a collection of two or more motors that monitor each others faults and stop if something is wrong. Each motor in a group creates a special connection to Spikemark that allows it to know if another motor in its group has experienced an issue so it can stop itself. This results in small position deltas between the grouped motors when one faults, making it ideal for multi-motor lifts.  Additional Group Motion features and fixes have been introduced after 4.0.0, but this is the big change.

You can read all the details here: cci.fyi/groups

Drive communication is an RS-485 serial link between the Variable Frequency Drive (VFD) and the Stagehand Control Card (SCC) inside a Stagehand. The VFD and SCC communicate by the Modbus protocol allowing the SCC to gather information and send it to Spikemark. With this modbus link Spikemark can view detailed drive faults, reset the VFD, auto tune and analyze the current and frequency for a given movement.

You can read all the details here: cci.fyi/drivecomm

The serial link allows opens up the following features for any Stagehand Pro or Stagehand Apprentice controller:

The auto-tune wizard for pro and apprentice allows for auto-tune parameters to be set via spikemark, and run the auto-tune sequence

Movement analysis for pro and apprentice allows for graphing of current and frequency over the travel distance.

No more need to dive under the table or to another room when a drive fault occurs.  Any Stagehand Pro and Apprentice can now reset drive faults via spikemark.

You can now move to an arbitrary position by right-clicking on a motor header and selecting “Load Position” and then “Run To Position”.  This feature allows the operator to move any motor (or group) to any position, reducing the need to have “burner” cues in the grid for independent moves.

Presets link to a specific cue, and are a super cool way to recall a cue.  The Preset displays the name of the Preset, what movements are executing and if there are multiple steps (linked cues). In addition there is also a mini stage model view displaying only the axes moving in the specific Preset.

The Pendant puts the power of Spikemark in your hand – you are no longer chained to the automation station and computer.

You can now point Spikemark to open a specific show file each time it starts.

Position Lag is another way for Spikemark to detect encoder loss and halt motion.  You can read all about it here: cci.fyi/mpe

Spikemark now supports PSN position output to expand on integration with a wider range of media server platforms.  You can read more about it here: cci.fyi/psn

Open Sound Control (OSC) is an open protocol for transmitting data between computers. Spikemark can send these OSC messages to any device that supports UDP OSC such as QLab, ISADORA or ETC EOS.  Additionally Spikemark can send real time motor position data using the OSC protocol like it does with Watchout (cci.fyi/watchout) and PosiStageNet (cci.fyi/psn).

By right clicking on the movement position box you are now able to “Add to Position”.  Let’s say you have a wagon at position on stage and someone would like it moved onstage a specific distance from the current position.  You can add and subtract to the current position with a positive or negative value, taking the guesswork out of “bumps”.

We spent some quality time behind the scenes making several large changes to the Pendant UI as well as adding features to help those running grouped movements and large shows.  Key features are listed below.

Along with the work on the Pendant and all those super features, we also spent time changing features and addressing bugs:

Below is the complete release notes for Spikemark 4 thru 4.4.0.  This list includes all feature updates, bug fixes and changes included.  You can find updated info when you update Spikemark or at any time by looking here: https://creativeconners.com/files/spikemark/Release_Notes.txt

9-6-18 V4.1.6
*FIXED* Connecting to stagehands that don’t exsist.
*FIXED* Firmware not being installed when authorization was used.

*CHANGED* Firmware is now sotred where ever spikemark is installed. It is no longer installed in the users AppData folder.

7-23-18 v4.1.3
*FIXED* Presets touch scrolling
*FIXED* When you press enter on the authentication login screen it now logs you in
*FIXED* Keyboard shortcuts working during run only mode

4-19-18 v4.0.3
*CHANGED* Default polling interval for motors has been reduced to 60ms from 125ms for smoother stage model viewer and tighter cue links.

*FIXED* Analyze movement screen too large for small screens.
*FIXED* Crashed sometimes while trying to read drive fault errors.
*FIXED* Sometimes crashed when attempting to open a showfile and a backup at the same time.

*ADDED* Grouped movements can now take advantage of Analyze Movement.
*ADDED* Grouped motors can now jog as a group with group-fault protection.  This is easier said than done. Jogging within a group must be goverened by a PID loop to enforce position error abort.  Jogging behavior is therefore necessarily different when jogging solo vs jogging in a group.
*ADDED* You can now move to an arbitrary position by right-clicking on a motor header and selecting “Load Position” and then “Run To Position”

*CHANGED* You can now use individual “Load Movement” and “Run Movement” commands in Run-only mode.

2-6-18 v4.0.1
*FIXED* NBug had a permissions issue that would not allow crash report zip files to be saved to the desktop.  Rejoice, this should now work fine even when run without admin privileges.

*ADDED* Motors now include a MIN JOG parameter that controls the slowest a motor may move when jogged manually.  This helps with the Apprentice Stagehand (and machines based on the Apprentice Card) that can get a little jumpy when jogging super-slow.  This doesn’t not affect cue movement which runs silky even in super-slow mode.

Stagehand firmware – we update it for a reason, so should you!

Every Stagehand Controller has a Stagehand Card inside, listening to Spikemark and talking to the VFD.  These cards require firmware running on the microprocessor to function the way we expect – every now and then we update the firmware with new features and bug fixes.  Firmware updates for any Stagehand motor controller or Stagehand Mini^2 are distributed and installed through Sprikemark.  You can see what hardware and firmware version your Stagehand is running from the Hardware pane in Spikemark. 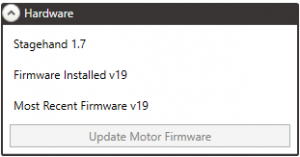 Below is a list of Stagehand Control Cards and the Stagehands they can be found in.
You can find the current published versions of Firmware here (https://creativeconners.com/products/software/)

Have no fear if you see “unknown” next to the most recent firmware – the fix is very easy.  Instead of opening the show file directly by double clicking, open Spikemark from the Start Menu, then open your show file from the File menu.  Once the show is open and all Stagehands are connected you will see all the correct info.  If you still see “unknown” after starting Spikemark from the Start Menu it probably means that Spikemark was installed under a different Windows user and the only way to learn what firmware is installed is from the face of the Stagehand Controller.  The current firmware is also displayed on the Stagehand Card at boot-up.

Any Stagehand that requires updated firmware displays a Cloud icon.  Updating the firmware only requires you to click the “Update Motor Firmware” button.  If the update button is not available, or if you are rocking REV10 firmware or you will need to complete the update manually.

Here’s how: (Huge warning: This does not apply to Stagehand FX’s! You cannot update your FX firmware and if you try, you will ‘brick’ it and you will need to send it back to us for a new firmware installation.)
0