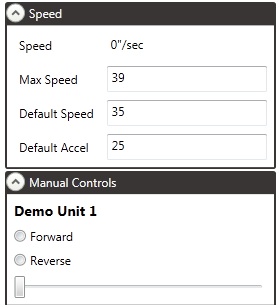 This month we’re going to look at Max Speed; how to determine Max Speed, how the Stagehand interprets Max Speed and what happens when Max Speed is set too high. The Max Speed setting in Spikemark limits how fast a motor can move in a cue. This value must be set no higher than the maximum speed the motor can physically attain when given full power. If you want to restrict speed during a show, you can set it lower than the motor speed at full power (eg. perhaps a winch can move at 5’/second but you want to limit cues to run no faster than 2’/second). To determine the Max Speed for a particular motor, first set your position scale. Then you need to run your piece at full speed, so get your machine ready and clear the deck. In Spikemark, navigate to the Manual Controls module of the Motor Settings pane, select a direction and then run your motor by sliding the manual slider all the way to the right, which will send a full-speed signal to the motor. In the Speed module directly above Manual Controls, the speed that the motor is running at is displayed. Note the speed when you have the slider all the way up. This is the maximum speed the motor can attain. This speed (or anything lower) is what you should enter into the Max Speed field in the Speed module. (Sometimes we take a point or two off just to be safe) Now when you’re programming a movement, if you enter a speed value higher than the Max Speed, Spikemark changes your value to the Max Speed, since it can’t go faster than that anyway. The important part of this month’s Spikemark tip is that the value you enter into Max Speed should never be higher than what is actually possible. We often get tech support calls from customers who enter an artificially high number because they just want the axis to move as fast as possible. The problem with this approach is Spikemark sends the cue to the Stagehand and the Stagehand calculates the total time the cue should take based on the acceleration and speed, even if the speed is not attainable. When the cue runs, the movement doesn’t complete in time because the motor can’t run fast enough, so the Stagehand continues to run the motor at full power until its target position is reached and then stops, but it stops without deceleration because it is racing to catch up with the programmed cue. And no one likes a movement that ends without deceleration. I like to think of it as a business man running late in the morning, racing for the train, and throwing himself through the closing train-car door as the train is pulling away from the platform; there’s nothing leisurely about the motion. Of course, all of this only happens when Abort On Position Error is turned off. If Abort On Position Error is turned on, the cue will fail early in its life cycle, because it won’t take long for the actual position to fall behind the expected position and the Stagehand will abort the movement once the Position Error grows too large. So the moral of this months Spikemark Tip is: Don’t set your Max Speed higher than it can run. Thanks for tuning in and we’ll see you next month!